The congregation of Faith Lutheran Church of Valders was formed on January 1, 1961, by the merger of

The original congregations were organized in 1850 by Norwegian immigrants who settled in this area of Manitowoc County mainly between 1847 and 1850.  These hard-working settlers battled the wilderness, working together to build simple homes and clear the land for farming.  In time, they also built the first roads, schools, and churches.  Pastor Claus L. Clausen, a traveling pastor, served these early settlers prior to establishment of a formal congregation.  Pastor H. A. Stub, pastor of a congregation in Muskego in Racine County, was called by these settlers in 1850 to help them establish a Lutheran church in Manitowoc County and call their first permanent pastor.

On October 4, 1850, a meeting was held to adopt a basic constitution to form the Norwegian Congregation of Manitowoc and Vicinity, which included 3 districts, Manitowoc, Gjerpen, and Valders.  On this day, a letter of call was prepared to their first pastor, Rev. Jacob A. Ottesen of Norway; which was eventually signed by 124 men.  On June 16, 1851, a more formal constitution and bylaws were adopted.  The congregation agreed to purchase 40 acres of land from Anders Aubol for $64.00 on June 17, 1851 for the purpose of building a parsonage to serve as the home for the pastor of the Norwegian Congregation of Manitowoc and Vicinity, as well as the cemetery for Gjerpen and Valders districts.  This land would also become the site for the Gjerpen Church.  Until a church was built, services were held in homes.

The joint congregations were members of the Norwegian Synod until the synod experienced great controversy in the 1880s.  In an effort to keep peace within their congregations, Valders and Gjerpen voted to withdraw their membership from the Norwegian Synod on February 27, 1889, by a vote of 114 to 30.  According to a historical sketch, written by Pastor Adolf O. Alfsen for the 50th jubilee in 1900, the Valders congregation again joined the Norwegian synod, but Gjerpen did not resume membership, however continued to provide support to the Synod.  The Synod controversy continued in the Valders congregation, resulting in a group seceding to form their own congregation, which would eventually become Our Savior’s Lutheran Church.  There would eventually be a merger of many Norwegian synods in 1917, which united all three congregations within the same synod.  However, the three congregations continued to function as separate units.

After the sudden death of Our Savior’s pastor Rev. Ole K. Espeseth in the spring of 1940, Pastor E. A. Fretheim recognized an opportunity for Our Savior’s to join with Gjerpen and Valders.   To facilitate this merger, he accepted a call from another congregation.  A Call Committee was formed with representation from all three congregations to call a new pastor to serve all three churches.  The new pastor, Rev. Martin Trygstad, was installed on September 23, 1940 as pastor of Valders Evangelical Lutheran, Gjerpen Evangelical Lutheran, and Our Savior’s Lutheran churches.  The three congregations continued to share one pastor, who would hold 2 services each Sunday, alternating between the three churches, until the merger on January 1, 1961 to form one congregation called Faith Lutheran Church.

The merger of the three congregations to form Faith Lutheran resulted from the need for consistency in location of church services and to provide an adequate facility for Christian education.  The merger was also a condition included in the call to Pastor Robert Onkka at his request.  Upon completion of the new church, closing services were held at Valders Evangelical Lutheran, Gjerpen Evangelical Lutheran, and Our Savior’s Lutheran churches on August 23, 1964.  Soon afterward, the three original church buildings were razed and their furnishings disposed of.  The land and cemeteries were retained at each site and operated under a united cemetery board.

The first recorded meeting held in the original Gjerpen Church was on November 29, 1852.

More detailed information on when building began or was completed is not available.  The church was eventually dedicated on September 26, 1856.  The original church building was a rectangular log structure, much like the homes built during that time. 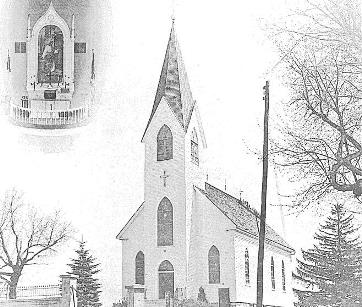 Construction of a new church building began in 1875 with the cornerstone being laid in June of that year, and dedication of the new church held on September 17, 1876.  In 1913 a new basement and stone foundation were put under the Gjerpen church.  Several updates took place in preparation for the centennial celebration in 1950, including new pews, carpeting, interior repainting and a neon steeple cross.

Building of the Valders church began in March 1853.  Since there was disagreement on the

location of the church, the decision of where it would be built was made by the winner of a tree-felling contest.  The original church building, an octagonal log structure, was dedicated on September 27, 1856.

A new church building was built and dedicated in 1864 at a cost of $4,000 to serve its rapidly growing membership.   A new parish hall was built following World War II to include a large main room, kitchen, two restrooms, heating plant and a neon steeple cross.  Dedication of the new parish hall was held during the Centennial celebration in September 1950.

Doctrine of the Norwegian Synod over predestination.  Land for the church site and cemetery was donated by Mr. & Mrs. Christoffer Evenson and family, and the cornerstone of Our Savior’s Church was laid in 1899.  The church was completed in 1900, with the first wedding held on September 26th. 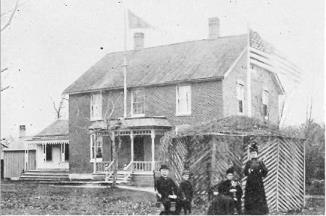 The first parsonage of the Norwegian Congregation of Manitowoc and Vicinity was built on the 40-acre parcel of land purchased by the congregation on June 17, 1851.  It housed the pastor and his family who served all three districts and was completed in 1856 for a cost of $415.  Since the original wood foundation had rotted, a new stone foundation was installed under the parsonage in 1867.

1873 for a cost of $1,303.25.  Since the Manitowoc district left to form an independent congregation, the new parsonage was owned jointly by the Gjerpen and Valders congregations.  In 1920 the parsonage was remodeled and electricity was installed.  This parsonage was sold in 1945 along with 35 acres of land.

Plans were formed to build a new parsonage following the merger of Valders, Gjerpen and Our Savior’s Congregations in 1940.  The three-church parish built the new parsonage next to Our Savior’s Lutheran Church in the village of Valders.  At this time, materials were scarce due to the war, so lumber was used from the old Valders School on top of the hill that had been torn down.  The new parsonage had a limestone exterior and was completed in the spring of 1947 for a cost of $23,000.  The parish office and Sunday school rooms were in the basement.  The new parsonage was dedicated on November 9, 1947, and was jointly owned by the three congregations.  This parsonage was sold in 2010, since pastors seemed to prefer purchasing their own homes.

Here is a list of Pastors who served the original congregations:

In 1961, about 7.5 acres were purchased from the Valders Canning Co. on the south end of the village of Valders as the building site for the church.  Architects Cooley, Borre and Associates of Park Ridge, IL were commissioned on January 14, 1962, to build the church and a

ground-breaking ceremony was held on September 29, 1963.  Dedication of the new Faith Lutheran Church was held on August 30, 1964, following a 12-hour prayer vigil held in the sanctuary.

Renovations over the years included an enclosed entrance on the upper west level in June of 1975, energy saving updates in the 1970s, a new sanctuary roof along with room dividers in Fellowship Hall in 1989, and new educational unit windows in 1995.  A capital fund appeal was held in 2012 to help fund major building updates consisting of a large addition and updates to the area previously referred to as the “Outer Narthex,” a new upper west entry, new bathrooms installed on the upper level, a new office space, installation of an elevator, a multipurpose room with kitchenette on the lower level, and 2 separate storage areas off the “Gathering Space” which were completed in 2013.  The large addition includes the “Gathering Space,” which has a welcome center, a kitchenette and tables for serving Sunday fellowship hour, a children’s play area, coat racks and conversation areas with comfortable seating.  The flat roof on the educational wing of the church building was replaced in late fall of 2017.

In February 1853, several Lutheran ministers including Claus L. Clausen, Hans A. Stub, Jacob A. Ottesen, and others organized the Norwegian Evangelical Lutheran Church in America, commonly known as the Norwegian Synod.  It was first organized at Koshkonong and Luther Valley near Madison and spread to other areas, including Manitowoc County.  The Synod adopted the teachings of the Church of Norway.  In 1868 the name was changed to the Synod for the Norwegian Evangelical Lutheran Church in America.

However, the Norwegian Synod soon experienced internal division over questions concerning predestination and conversion, and during the 1880s about a third of its congregations left. These dissenting "Anti-Missourian Brotherhood" congregations joined in 1890 with the Norwegian Augustana Synod and the Norwegian-Danish Conference to form the United Norwegian Lutheran Church of America.